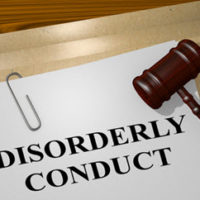 A Virginia man was convicted of disorderly conduct for discharging a flamethrower during a public rally, reported WTOP. Last week, this man received a 20-day prison sentence for his offense.

On August 12th of last year, the Virginia man brought an improvised flamethrower to a protest rally in Charlottesville. The man sprayed flames at a man holding a flagpole, the images of which went viral.

While the Virginia man serves his jail sentence, it seems like an opportune time to review Virginia laws concerning disorderly conduct and assault and battery.

Under Code of Virginia Section 18.2-415, there are two elements to a charge of disorderly conduct. The first element involves intent. Disorderly conduct refers to any action that is intended to cause “inconvenience, annoyance, or alarm” in public.

The second element centers on the type of conduct involved and where that conduct took place. Section 18.2-415 provides several examples of disorderly conduct, including:

Assault and Battery in Virginia

Under Code of Virginia Section 18.2-57, assault and battery is generally a Class 1 misdemeanor in Virginia. The typical penalties are the same as outlined previously for disorderly conduct.

That being said, assault and battery can become a more serious offense in certain circumstances. Under Code of Virginia Section 18.2-51, for example, it is a Class 3 felony to maliciously stab, shoot, or wound another person. The typical penalties for a Class 3 felony in Virginia include five to 20 years in prison and up to $100,000 in fines.

If you have legal questions about disorderly conduct, assault and battery, or other crimes in Virginia, it is immensely valuable to consult with an adept criminal defense attorney. The attorneys at Simms Showers LLP , servicing Leesburg, Winchester, Fairfax, and Manassas, have many years of combined legal experience in the field of criminal law, including disorderly conduct and assault and battery. If you need legal help with criminal defense, contact us today for a free initial consultation.