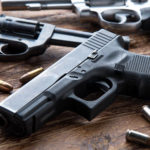 What is the Virginia Uniform Machine Gun Act?

Virginia gun laws are some of the most generous and favorable to gun owners. However, Virginia gun laws can also be confusing. Just recently, Virginia tightened its concealed carry law, which previously allowed gun owners from other states to continue carrying their weapons concealed in the state, so long as they held a valid… Read More »

Out of State Travelers Beware: No More Gun Permit Reciprocity in Virginia

If you are visiting friends or family in Virginia from out of state this year, you may want to think twice about bringing your gun with you. Although Virginia has historically recognized the concealed carry permits of most other states, new regulations have changed that. Attorney General Mark Herring recently announced that Virginia’s reciprocity… Read More »