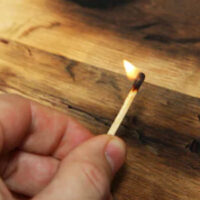 A house fire in Virginia left one person dead, in what appears to be a felony arson crime, according to an article by the Loudoun Times-Mirror.

This incident occurred on Saturday, June 5 at approximately 8:30 p.m. Units of the Loudoun County Combined Fire and Rescue System responded to reports of a fire in the 12000 block of Stonehouse View Court. Units from Lovettsville, Purcellville, Hamilton, Loudoun Heights, and Moorefield collaborated with several units from Maryland to fight the fire.

When firefighters arrived on the scene, a single-family home was on fire with reports of an adult occupant and potential gunfire. Due to the reports of gunfire, the Loudoun County Sheriff’s Office responded and ensured that the area was safe. Firefighters were then able to approach the structure and fight the fire, even though it took several hours to quiet the blaze.

Initial reports from the Loudoun County Fire Marshal’s Office indicate that this fire was incendiary in nature and caused approximately $877,047 in damages. This incident remains under official investigation.

It seems likely that the perpetrator will face arson charges under Virginia law. This seems like a proper occasion to review the Virginia laws against and penalties for arson.

Section 18.2-77 lists a number of buildings and structures that qualify, including:

Section 18.2-77 also furnishes the Virginia penalties for arson. Generally speaking, the punishment for this offense changes based on whether the structure was unoccupied or occupied.

If the building or structure in question was unoccupied at the time of the offense, arson is typically charged as a Class 4 felony. Upon conviction for this class of felony, the penalties can include imprisonment for two to 10 years and criminal fines up to $100,000.

If the building or structure in question was occupied at the time of the offense, the punishment becomes more severe. Upon conviction for this type of felony, the penalties can include imprisonment for five years to life and criminal fines up to $100,000.

If you need legal assistance with arson or other crimes in Virginia, reach out to the Leesburg criminal defense lawyers at Simms Showers LLP. We are eager to provide you with an initial consultation.