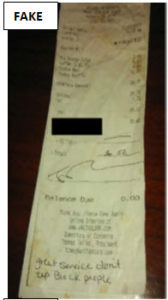 Our firm represents a customer who visited the Anita’s Mexican Restaurant in Ashburn on January 7, 2017.  Our client and his girlfriend were served by Kelly Carter, an employee at Anita’s, and paid for their meal and left at 11:09am EST.  Although Ms. Carter provided what our client believed to be objectively poor service during the meal, he made no remarks to her, but instead tipped her $0.01 and wrote “terrible service” on the bottom of the merchant receipt that he left on the table.  Unfortunately someone re-printed our client’s receipt after he left, forged his signature, left a $0.00 tip, and wrote on the bottom “Great Service Don’t Tip Black People.”  This fake receipt was immediately posted online and reported by numerous media outlets. 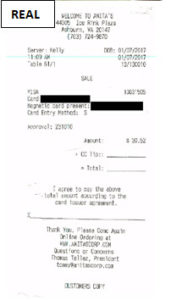 We have contacted Anita’s through their legal counsel and demanded that they set the story straight and find out who is responsible.  To our knowledge, they have not provided a substantive answer or conducted an investigation.  Our client calls upon Anita’s to take a formal position on this matter after a thorough investigation.  The owner of Anita’s, Thomas Tellez, is recorded in numerous public statements as saying that this event did happen.  Our client is unaware of what Mr. Tellez knew at the time he said that statement, but our client has now made Mr. Tellez aware of his side of the story and demands a response.

Please direct all responses to our office solely and directly by email, at djh@simmsshowerslaw.com.